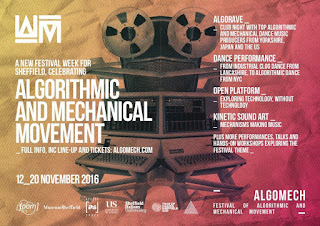 In November 2016 OPEN PLATFORM_7 returned as part of AlgoMech 2016 - the first Festival of Algorithmic and Mechanical Movement in Sheffield!

AlgoMech seeks to examine the complex relationship between technology and performance, with the first edition of the festival celebrating the resurgence of making in performance, where creative processes are made visible during a live event.

At the heart of OPEN PLATFORM/RAP(s) - TwT.  lies the idea of making performance from algorithmic processes and translating computational processes into physical presentations and performances. Here are the 5 performers who took up the challenge to re-think the digital at OPEN PLATFORM_7/RAP(s) - TwT.algomake! 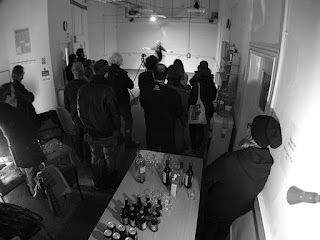 With On/Off (core performance) Susanne Palzer radically reduces 'performance' and the 'digital' to the act of going on/off and binary machine code of ones and zeros. A performer steps on and off a platform saying 'on'/'off' and thus embodies computational processes in physical performance by 'writing' and 'executing script' simultaneously. All 'live coded' performances are improvised but draw on a pool of 'samples': (emotional) mental images are accessed semi-randomly to create a dramaturgy for the live performance. Human and machine labor become tangible through the performer's exertion which transmits to the audience. At the center of On/Off is the body, highlighting that both performance art and digital technology are about information exchange, communication and connection. 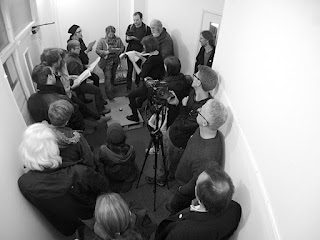 The temporality of memory and its fragility is now stored in many mainframes and we are reminded of moments in our lives not by our senses or our relationships with people but by algo-rhythmical data. Facebook reminds us in date order of our memories; the fluidity of experience lost to time.
Lou Hazelwood presented a timehopping reading performance compiled from snippets of overheard conversation. With contributions from Toni Buckby, Brain G Gilson, Rachael Hand, Susanne Palzer and others. 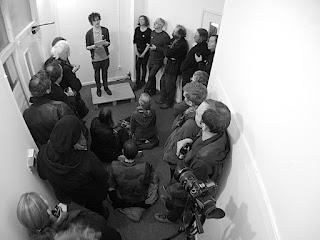 Michael Borkowsky performed a number of poems from the zine 'Pixel Poetry'. Pixel Poetry is a series of poems designed to extend our experiences and perceptions of video games by pulling them out of their original context and examining them from the context of poetry.


Brian G Gilson - Title Yet To Be Confirmed 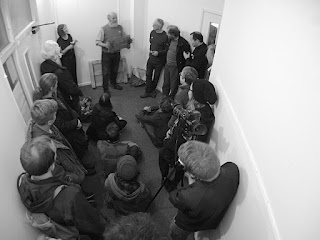 Brian G Gilson presented a reading performance generated by audience throwing dice.
Having appeared at previous events this time Brian brought his own platform because now that Hull is going to be UK City of Culture 2017 he thought they should have one, too. 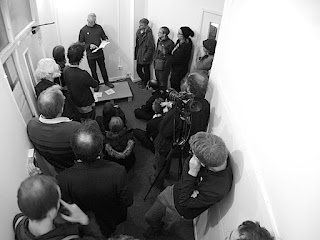 Most people that own a modern computer or telephone are familiar with the idea that such devices are full of billions of transistors. Most people, quite rightly, never consider the function of billions or individual transistors. Why would you? Today anyone can search and retrieve transistor specifications directly from manufacturers. However, internet browsing does not adequately convey the optical aura and pattern serendipity of the gaze on a page of data in a physical book. The poet Paul Valéry declared that "a book is a machine for reading". In the case of Towers' International Transistor Selector it is a machine that is made of transistors unlike any other.
http://johnmoseley.co.uk/

AlgoMech 2016 took place in various locations around Sheffield, UK, from 12-19 November 2016. The festival featured talks, hand-on workshops, concerts, performances and an Algorave, all exploring algorithmic and mechanical movement. AlgoMech was organised by FoAM Kernow and LoveBytes, in collaboration with Millennium Gallery, Access Space, and Sheffield Hallam and Sussex Universities. AlgoMech 2016 was part of Year of Making Sheffield 2016.

AlgoMech 2017 will take place from 8-12 November this year. The Facebook event is here.