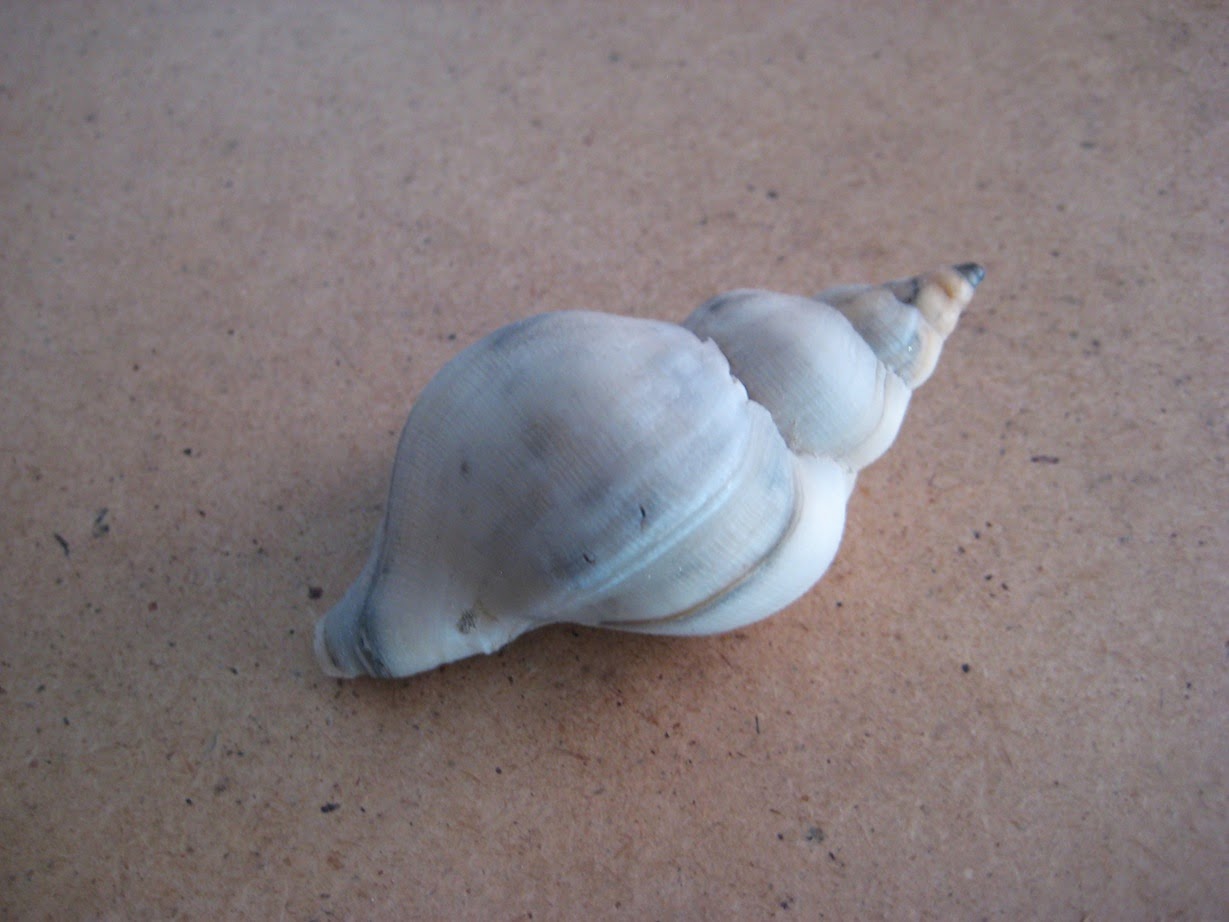 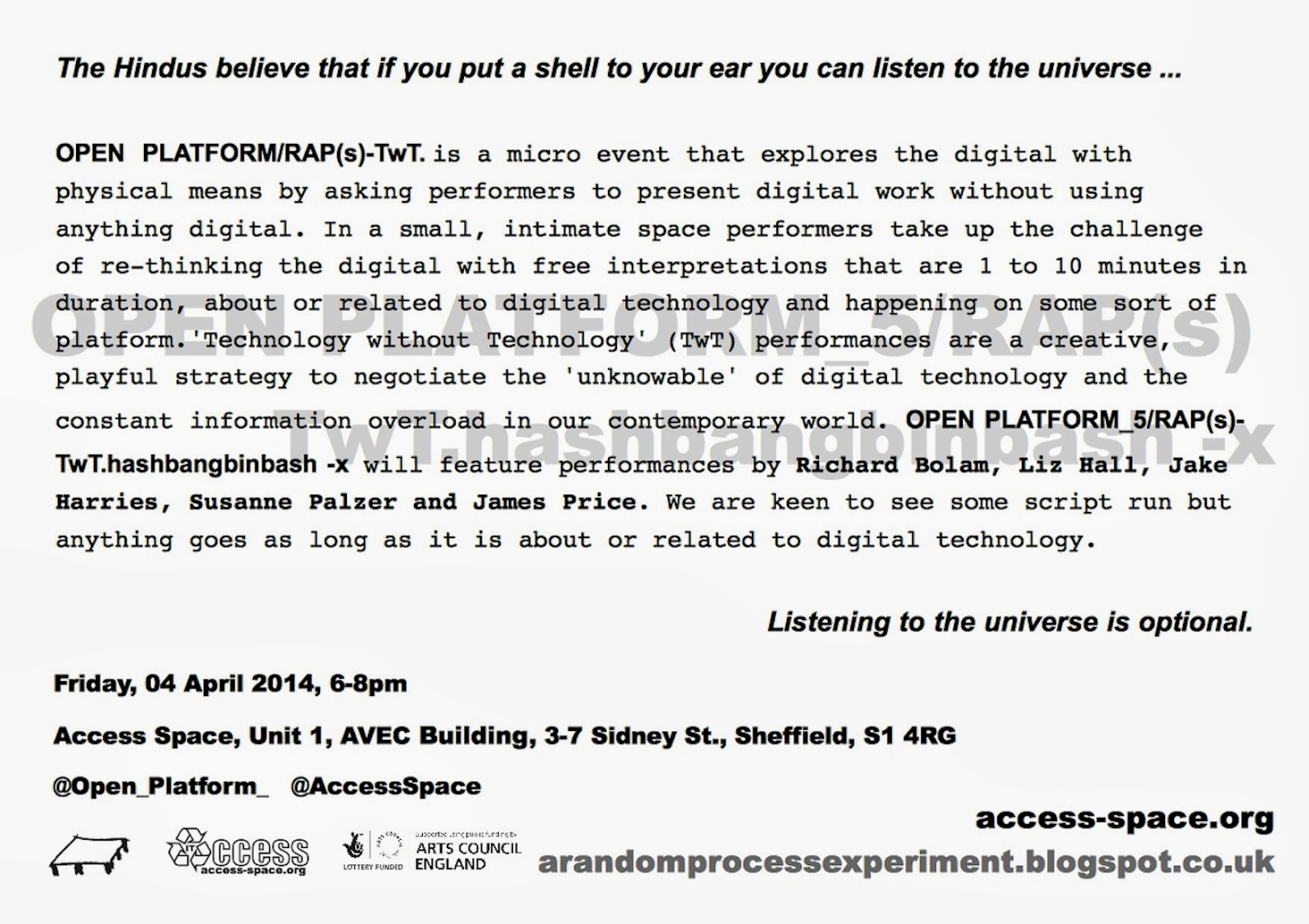 OPEN PLATFORM_4 opens with a collaborative experiment in live coding without electricity. For the duration of 10 minutes Alex McLean transcodes every step of my binary on/off movements into a knit or pearl and produces a piece of fabric which represents the live performance. To allow for the 'human transcoding' by knitting I perform a slowed down version of a performance piece in which I step on and off a platform.

The collaboration brings together elements of Alex' ongoing research into 'the binding of analogue and digital forms in the context of computer programming' and my current practice of investigating into the fusion of digital technology and physical performance. On/Off is a series of performances which explore the intersection between performance and technology by deconstruction.

Some thoughts on Alex McLean's 'knitting metaphor' can be found here.


Next on the platform is Eddy Dreadnought presenting a spoken piece. Apparently drawing on his "complete lack of knowledge" of how computers work he reads us an enlightening story about silicon. 'Motherboard' follows on from 'Embryonic Thought' which he performed at Manchester Science Festival in November.


Here is an excerpt from 'Motherboard':

Message two: 'silicon language is spelled in letters, but also numbers and algebra, punctuation symbols and symbols from keyboards like percentiles and money, and symbols from playing cards and from any alphabet, Arabic, Armenian, Cyrillic, Greek. And it has words for breathing, and pauses and stress, and the inscrutable intonations of Mandarin. And sometimes passages of volatile bits, its cells of zero and one, hoop and stick, all clicking like the consonants of Africa. And sometimes silicon language is in colour, and sometimes hovers over the screen as spatial as the helter-skelter of DNA'.

Message three: 'silicon cannot understand the kaleidoscopic ambiguity of our mother tongue, so talks in obsessively precise circles to avoid mistakes and shut out background. and its words are imperative because silicon has no common sense. It is at once retarded and advanced, concrete and mercurial. And unable to read eyes or bodies.'

The final message: 'the best silicon languages, though stripped of metaphor, can put into words inexpressible ideas, to become poetry. Recursively rhythmic like music or perseverating like Gertrude Stein. Esoteric languages whose vocabulary is the white space between words, or the movement between twenty modernist colours. or squares of cells like Vermeer chequerboard tiles.' ..."

Shortly after Eddy's performance a strange packet arrives and completes an asynchronous transmission from New York! Over the duration of four weeks, and based on a digital transmission that uses 'packet switching', Kate Sicchio sent several 'coded packets' by post from across the Atlantic to different recipients in Sheffield. All have brought their 'packets' with them to OPEN PLATFORM_4. Now a 'terminal' has to be 'unzipped' and placed on the platform. The 'packets' are being 'switched' between audience members, then assembled together in the correct order and finally 'presented at the terminal'. Contained within the 'packets' are cards with binary code on one side and a corresponding letter on the other. Once all cards are in place on the 'receiving terminal' the message is revealed: "Hello World"!


We are currently developing OPEN PLATFORM/RAP(s)-TwT. into a mobile platform and our intention is to build a digital network with physical means. Asynchronous Transmission was conceived and devised in dialogue with choreographer Kate Sicchio exploring the possibilities for remote performances without live transmission.

A brief technical description of 'asynchronous transmission' can be found here.


Straying slightly from his usual practice, which involves performance and the use of Processing and Csound, Brian G. Gilson performs a poem for his first appearance at OPEN PLATFORM: 'if-then' is an entertaining and clever simulation of a sonnet written using a two state cellular automaton.


Jake Harries - Living the Spam I


With tinsel, santa hat, western union forms and a guitar Jake Harries brings festive spirit to OPEN PLATFORM_4. An expert in 'living the spam' he updates us on his latest romantic adventures and closes the event sharing his pre-Christmas joy!