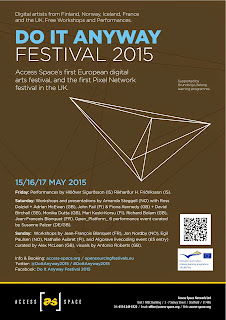 In May this year OPEN PLATFORM_6 returned as part of Do It Anyway Festival 2015 - the first digital arts festival at Access Space and the first Pixel Network festival in the UK.

Following on from OPEN PLATFORM_5 last year Access Space and OPEN PLATFORM/RAP(s)-TwT. once again welcomed artists, curators and cultural producers from Finland, Iceland, France, Norway, Latvia and the UK, introducing a new audience to our evenings of digital randomness!

Susanne Palzer opens the event with a performance which emulates a colour picker screen for web designers running in the background. While moving a cursor across an invisible screen Susanne Palzer vocalizes RGB codes in random combinations. The performance intends to highlight how familiar digital processes only exist through hidden code and numbers - the vocalized colours remain unseen. At the same time the analogue performance allows for a combination of RGB codes which may produce 'impossible colours' and positions colours in random locations on the spectrum.


Leila Johnston - A Talk about Fantasy and Technology

"Old people, who can make clothes, fix cars and build furniture, think young people are good at technology because they can click on a picture. ..."

Not without humour 'A Talk about Fantasy and Technology' is a thought provoking and reflective call for adventure and fantasy. Looking at the past and future of digital technology Leila Johnston from Hack Circus demands to bring magic back into technology, "to empower it to be unpredictable and useless - to make it interesting to us again."
A full transcript can be found here.


Silvia Champion - Search Engine: What is home for you?


Silvia Champion 'uses' the audience as a search engine by inviting everyone to access the platform and share their thoughts on the questions "What does home mean to you?" and "What can the word home mean?". She copies all researched info by hand to "process it later". At the end of the performance Silvia gives away soap houses made by the artist so everyone can "take a house home".


Chella Quint analogue tweets stories that took place in a time and place without Twitter. Reducing known fairytales to 140 characters, 'typed' with a pen and 'backspaced' by rubbing out, for 10 minutes the audience is only allowed to "tweet with their eyeballs and scroll past by looking up and down".

"The client arrived late but wanted to start early."


Drawing on his real-live experiences as an AV professional at conferences, award ceremonies and corporate events, Richard Bolam describes to us the ultimate Dystopian Conference. "It's all true."


Pixelache Network is an international network of cultural organizations enaging with art, technology and social change. Access Space is the UK hub of Pixelache Network.

Do It Anyway Festival ran from 15 to 17 May 2015. Over the weekend the festival featured free performances and workshops. Do It Anyway 2015 was developed as part of a larger EU Grundtvig supported project called Open Sourcing Festivals, co-produced by five experimental art, design and technology organizations from the Pixelache Network and focused on open source culture. Open Sourcing Festivals was a mobile circuit of workshops and seminars organized across Europe during 2013-2015 by Piksel (NO), Pikslaverk (IS), Mal au Pixel (FR) and Pixelache (FI). In the process the partners have been gradually working towards 'open-sourcing' the knowledge embodied in their respective workshops and festival production, in order to share it with a broader range of users. A database of resources and documentation is accessible here.